If you’re thinking about installing new doors in your home then have you considered the benefits of sliding doors? A sliding door, to be precise, is a door which opens horizontally by sliding which can be mounted on top of a track or be suspended from a track. Some clever sliding doors even disappear into walls when they are opened. They are often seen being used as shower doors, screen doors, glass doors and wardrobe doors. Bifold doors also fit into this category of door.

They slide due to a sliding door gear, either bottom rolling or top hung. To make the motion as smooth as possible, brush seals are often used. You’ll most likely see the top hung version, for example in wardrobes and they come in a whole variety of designs and mirrored. Two trolley hangers at the top run in a concealed track and take all the weight so the door is easier to open. To prevent damage from impact, a track stopper is employed to hold the door open or closed if slammed. There is also a bottom roller to prevent the door from swaying and the rollers have safety locks to prevent the door from jumping out of its track.

If a door is too heavy then a bottom rolling system will be needed with two rollers running on a track and two rollers running at the top. As there is more weight at the bottom of the door, this results in the need for a more forceful closing and opening action. There is also something called a lift-and-slide door gear which allows the door to be lifted out of the frame during opening and closing. This gives a better seal and better soundproofing. 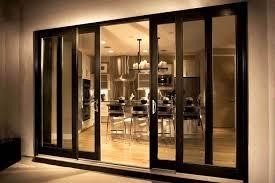 The benefit of sliding doors is the amount of space that is saved. There is almost no room needed to open these doors. The mechanism is sound as it cannot be lifted out of its hinges and they are easy to automate. Sliding doors are a great idea if you only have a small space available as there is no restriction on where furniture can be placed as they don’t open into or out of the room. Sliding doors will also make a room look bigger, even when closed, as there is little between you and the great view of your back garden. The provide a wider exterior view and let in much more natural light than other types of doors. In fact, you might be surprised to learn that sliding doors have been used as early as the first century AD in Roman houses. Archeological findings in Pompeii, Italy have found early versions of the sliding door concept.

Automated sliding doors are commonly seen in shops, hotels, offices and airports.  Automated doors contain a motor and activation system to operate them. They contain a magnetic locking mechanism that can unlock automatically in the event of an emergency. Normal sliding doors are used for wardrobes, patio doors and room dividers.