After the sixties had come to an end and the Beatles had called it a day there bad boy shadows The Rolling Stones showed no signs of stopping. In fact in 1974 they even tried their hand at one of these new fangled music videos that people were thinking of producing. The song was good and this time, eschwing the usual rock look of jeans and t-shirt, messers Jagger, Richards, Wyman, Watts and Taylor (no Ronnie Wood just yet) decided that they would go with something different as this was going to be shown on the telly. Videos were a great way for the band to not have to show up on Top of the Pops or whatever in person but still get their faces seen. It meant they could stay at home and have, ahem, a nice cup of tea and an early night. 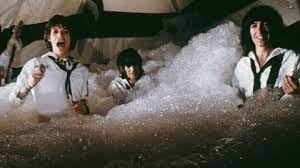 The scene was set: a huge inflatable dome was set up in a studio and the boys were inserted inside. For some reason they are all dressed as sailors. The reason for this is not explained but you can tell that Charlie and the boys should really have opted for a visit to EJ Menswear if the internet existed in 1974 and got some Levi Menswear instead. 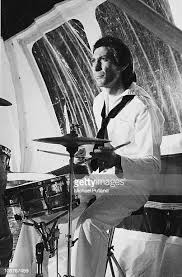 As the band played the dome began to fill up with bubbles from a supposedly skin friendly detergent. Jagger capered around as he usually did but unbeknownst to them Charlie Watts was slowly being submerged, As he was sat down he was the first to go. A languid drum stick is waved above his head at about three minutes in and we see him staggering out with the rest to them totally covered in foam. Why did they agree to do it? Why not? It’s the best answer as it is the Rolling Stones after all.  See it here