One of the most difficult scenes to shoot in the world of television is the nightclub like a Nightclub Cheltenham scene. It’s strange to think that what you actually see is in no relation to the scene on the screen. To start with, so the dialogue script isn’t lost, the scene is actually filmed in silence so that the great love scene/confrontation/altercation or big kiss with the “dancers” all shuffling around as if they are really feeling it. However, sometimes the music is really playing and the whole routine plays in front of you that you not actually sure that what you’ve seen is real. This is especially true of the famous Dick Clark’s Rockin New Year’s Eve scene in Friends where Brother and Sister Monica and Ross in a desperate attempt to get on the camera decide to do “the routine”. It’s not a real night club it’s a tv studio and its unlikely you’ll see anything like “the routine” at a prestigious Nightclub Cheltenham way as the one in which the New Year’s Eve show is filmed. Let’s look at how this iconic scene from Friends plays out.

Ross and Monica are excited. They have heard that Joey’s potential Girlfriend has been selected to be one of the models at the filming of Dick Clarks Rocking New Year’s Eve a staple fixture of American television culture. Monica and Ross have watched the show since childhood and long dreamed of being on the show. My how that evening must have flown by for their parents. They manage to convince a reluctant Joey to let them go. At first, they express utter amazement that the show isn’t transmitted live on the night (presumably they have to do this as the models have better things to with their time on the actual night) and that its very unlikely Dick Clark will actually be there.

Putting these disappointments aside they start to dance in the hope of being on the upper stage when the Times Square ball drops. This is essential, so their parents will see them. They decide to do the routine which brought them the esteem and highly prized honourable mention in the Brother Sister Dance category. They go for it in what must have been hard but fun work for the actors Courtney Cox and David Schwimmer. Schwimmer in fact looks very comfortable. 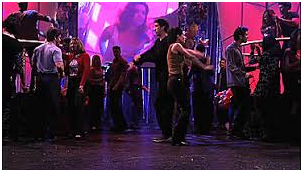 Needless to say, the routine involves slightly exaggerated bad eighties dance moves culminating in Monica leaping into Ross’s arms. This is a change to the original as when Monica was very overweight she caught Ross!